Saint Bernard's began in 1973 as a mission of Saint Clement's Parish of Bixby. During the next five years, the people of Saint Bernard's met weekly for Mass in the chapel of the Vianney School for Girls, a private corrections institution operated by the Sisters of the Good Shepherd. The congregation initially numbered about fifty families. In 1978, newly appointed Bishop Eusebius J. Beltran made Saint Bernard's an independent parish, with Father James White appointed as the first pastor. The new parish found a vacated church in Jenks and the first Mass was offered there after some remodeling by the end of October 1978. Offices were located a few blocks away, behind a veterinary clinic. Growth soon outstripped these facilities. About the same time, the Good Shepherd Sisters made the decision to close the Vianney School, and agreed to sell nine acres to the diocese. Included were the gymnasium and its classrooms. Bishop Beltran blessed the gymnasium as the new worship center, CCD classrooms and office space in March 1980. The balance of the Vianney property was sold to Saint Bernard's in October 1980. This transaction included the Vianney building, convent and acreage amounting to thirteen acres. Later, the western area of the property was sold. Soon the gym was no longer able to accommodate the growing parish as a place of worship. Plans were developed in 1982 to build a church building which would seat over 800. After several delays, the sanctuary was completed and dedicated on the feast of Saint Bernard of Clairvaux, August 20, 1984.

By 1985, Saint Bernard's along with the greater Tulsa community experienced a major economic downturn. Many of the original parishioners were forced to leave Tulsa to seek new employment. Over the next several years, as the area diversified its economy, Saint Bernard's found itself with many new families. In 1990, with the economy now stable, a major growth period within the parish took place nearly doubling membership to over fourteen hundred families by 1999. Father Bernard Jewitt was appointed as the parish's second pastor in 1991. Over the next several years Father Dan Mueggenborg, Father Stan Sloan, Father Patrick Eastman, Father Josh Litwack, Father Archie Fernandez, Father Bob Cain, Father Jose Thottathil, Father Mark Estillorie, Father James Van Nguyen and Father Sean Donovan have served in the capacity of associate pastor. 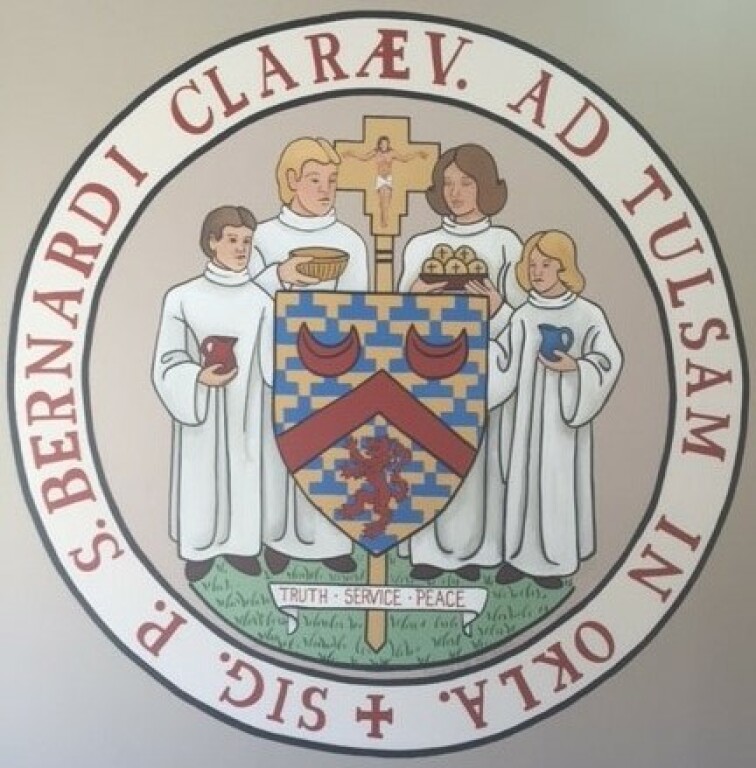 With the growth of the parish, Saint Bernard's programs have adapted to the always changing needs of its parishioners. Religious education and music departments have been in place since the parish's inception. The position of Director of Ministries was created in 1983, followed by a Justice and Peace Coordinator (1989) who assists with the parish's outreach program. A comprehensive stewardship program was instituted in 1987. Tithing began on ordinary Sunday collections in 1990. Major gifts were provided by Saint Bernard's to All Saint's school in 2008, Bishop Kelley High School in 1993 and 2006, and to Holy Cross Church in Wagoner in 1995. Funding to assist parish students attending Catholic universities began in 2001 with money that was raised by parishioners during the Diocesan Fund for the Future campaign in 1998.

A "day of caring" was added to the annual Bernardfest celebration in August 1992, providing parishioners opportunities to give their time and talent to the parish. Father Sloan served as youth minister during his years in the parish. A full time youth minister was added to the parish staff in 1997. The first parish mission was held in 1994 with additional missions having taken place in the ensuing years. In an effort to reach out to younger parishioners, the parish offered its first mission aimed at those in high school when it held XLT in August 2006. Parish youth, during 2011, undertook the first mission trip in parish history when they traveled to Knoxville, TN. In addition, Saint Bernard's also began a men's program entitled, "Men of the Upper Room" with weekly meetings starting in 2006. The Knights of Columbus formed a new council in the parish in the fall of 2007 and a women's service club, the Clairvaux Club began meeting also in late 2007.  A retreat program known as Adoration, Community, Theology and Service (ACTS) began in 2011. In 1997, Saint Bernard's, along with Christ the King Church, provided funding and manpower to build a home for Habitat for Humanity. Additional houses for Habitat were completed in 1999, 2000, 2002, 2004, 2005, 2006, 2008, 2009, 2010, 2011, 2012, 2013 and 2014. Funding for these projects has come from parish members outside of their regular support.

Through the generous support of its parishioners, many changes and improvements to the facility have been made in recent years. The community room received a major renovation in 1992 and again in 2010. Modifications to the sanctuary were completed in 1993. A new sound system was added to the church in 1999 and a new electronic organ in 2002. Infrastructure repairs such as roofs, plumbing, air conditioning systems and window replacements have been accomplished annually. The Griffith Building (formerly the Vianney Building) received a major electrical upgrade in 1999. With this repair in place, the parish was then able to undertake the complete restoration of the chapel in the Griffith Building. When completed in September of 2000, the newly renamed Good Shepherd Chapel became the site of daily Mass and Adoration of the Blessed Sacrament along with smaller gatherings such as baptisms, weddings and funerals.  As part of the computer revolution, computers and e-mail addresses were put in place in 1997 and have been upgraded as needed. The first website was opened in May 1999, and was revised in 2002 and 2009.

A new chapter in parish history began in June 2007. Msgr. Patrick Gaalaas became Saint Bernard's third pastor as Father Jewitt retired. Soon after arriving, Msgr. Gaalaas, along with the parish council, developed a survey in 2008.  That effort led to the undertaking to put Master Plan 2035 into place in 2009.  At that point, Msgr. Gaalaas and parish leaders decided to proceed with the first phase of the new master plan and formed a building committee.  By 2011, an architect was in place with plans being drawn.  In early 2012, with the first portion of the architect’s work nearly complete, Saint Bernard’s engaged the services of a fund raising company to help raise the necessary funds to construct Phase I of Master Plan 2035.

A Blessing of the  Grounds, led by Bishop Edward J. Slattery, Bishop of Tulsa, was held in August of 2012 as part of the annual Bernardfest celebration.  Shortly after, it became clear that the project would likely be more expensive than originally believed.  Revisions to the building's plans were completed in the spring of 2013 and a ground breaking ceremony took place in April of 2013.  A major goal of the project was to bring the church, gym and Griffith Building together under one roof.  The new building was also to include an expanded Marian Chapel within the church itself, a new entrance to the church, an indoor gathering space , prayer garden, remodeled restrooms,  production kitchen and nursery.  It was expected to complete construction in September of 2014. May 25, 2013 saw Bishop Edward J. Slattery ordain Todd Nance into the priesthood.  Father Nance became a member of Saint Bernard's in July 2001 at the age of 16 and is belived to be the first diocesan priest from St. Bernard's since its founding in 1978.  Fr. Nance's first Mass was offered here in the parish also on May 25, 2013 with a celebration honoring the entire Nance family following.